Our strategy at Level Up Academy is to provide high class facilities for local organisations to carry out their activities and to give them a teaching and coaching space suitable for their needs where other venues can not. Whilst at Level Up Academy we don't actually teach or coach our own sessions, we have partnered with a number of local organisations that will provide world class coaching. This week we will be highlighting each of those organisations that we are already working with and will be starting classes this year!

The first organisation we'll be highlighting is SingleBound Parkour. SingleBound will be responsible for coaching and teaching Parkour classes at Level Up Academy.

SingleBound Coaching founding members Jim Key and Dale Annous began training Parkour in 2003/4 in London and Lincolnshire. Both became prominent members of the early Parkour Community in the UK and helped the scene grow. In 2008 they became qualified (British Parkour Coaching Association) coaches and as two of the first coaches in the UK and began coaching parkour classes in Lincolnshire for schools, leisure centres and the public. In 2011 they both moved to Leeds and officially formed SingleBound Coaching.

SingleBound currently has the only qualified Parkour/Free Running coaches operating in Leeds.

Head coach Jim Key currently holds an Level 2 Coaching Qualification from Parkour UK, the official UK governing body for Parkour & Free Running, as well as being an affiliated member of Parkour UK. Jim and his team of assistant instructors are committed to maintaining the highest standards of Parkour coaching.

In 2014, Jim and Dale joined forces with martial artist and stunt performer Martin Wan and Level Up Academy was born.

Prior to the opening of Level Up Academy, SingleBound have been mainly operating from council leisure centres, school halls and gymnastics centres and are looking forward to being able to make full use of the facility!

Full information about when SingleBounds sessions will be scheduled will be released closer to our opening. For now make sure to check out their website for the latest news and information! www.singlebound.co.uk

Want to get involved with Level Up Academy? If you teach a class and you think you'd be a good fit for the facility, we'd love to hear from you! hello@golevelup.co.uk 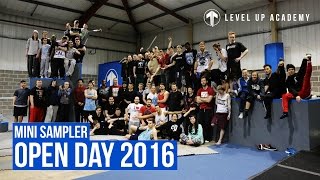 We did it! Level Up Academy is Open!

Level Up in partnership with Leeds College of Building

Level Up Academy in the news!

We did it! Level Up Academy is Open!

Level Up in partnership with Leeds College of Building

Level Up Academy in the news!